Those of us in horror love our anthologies.

We like the frights to come fast and to come often. I think that’s one small reason why the anthology format works so well in horror. We sit down, we read, we want a jolt. If I grab a novel, I’m not assured that jolt. I might have to slog through pages and pages of boring exposition and some bull crap called characterization and plot building. If I grab an anthology and read a short, then (in theory, at least) I should be assured a jolt.

That’s a terrible over-simplification, but I hope I’ve gotten my meaning across.

V/H/S is a collection of five horror vignettes bound together by a framing narrative. Despite the title, this isn’t set in the 80’s, but contemporary times. Different well-known directors for each vignette (at least “well-known” in horror fandom). The whole thing is filmed in “found footage” format (no, hold on, don’t run off!).

The film opens weakly. If you read this review and decide to watch V/H/S, either suffer through the first ten minutes or take the smart path and make use of your fast forward option. I’ll even tell you what you’re missing. I watch and suffer so that you don’t. There are a bunch of lowlifes, who in our framing story are filmed committing acts of destruction, vandalism, sexual assault, weak swearing (Samuel L. Jackson needs to come teach these guys the proper way to say “fuck”), and inexplicably this is all inter-cut with a scene of one of the creeps trying covertly to film himself having sex with a woman.

The movie’s plot finally starts when the leader of these delinquents gathers his friends for a “job.” He has been tasked with stealing a videotape from a house. As we’ve been shown, these guys film everything, even acts of felony, so cameras are rolling as they arrive and break into the home. It appears that nobody is home until they find a room on the second story filled with a wall of televisions, stacks and stacks of videotapes, and VCRs. And a fat dead old man and the chair he sits on.

Why is the guy dead? Did somebody get all A Clockwork Orange on his ass and make him watch Cannibal Holocaust or Zombi until his heart gave out? Don’t know, the film never tells us. He is there just because, okay.

Don’t give up on the film just yet. Please bear with me a little bit further.

So far, this movie is trash. At the time, I wanted my 20 minutes of life back.

Naturally, the leader doesn’t know what the tape looks like, just that he will know supposedly when he sees it. Great plan when there are hundreds of tapes all about.

The leader of the band of merry thieves directs one of his lackies to start watching the tapes in the room with the dead guy. One by one. That will get the job done, right? They’ll find that tape in no time!

Mercifully, we leave the framing story and we go to the first vignette.

And just like that, we’re dropped into the best 20 minutes or so of V/H/S.

The guy with the spy glasses meets this woman:

Her name is Lily. She tells Clint (guy with glasses) “I like you” many times, but she doesn’t say much else. It is obvious that something is a little off with Lily, but the guys decide to take her and another lady back to the hotel with them.

The woman with Lily passes out from too much booze. In an act of marvelous chivalry, the lead guy elects not to rape the woman, and instead decides to make his move on Lily. She is quite pretty in a psycho-killer kind of way.

Lily is definitely a little off. And a little different. And what happens next is one terrifying and couch-clenching situation. Well done, David Bruckner!

The clip ends, and the movie takes us back to our framing narrative. Stuff happens. Next vignette, please.

I’ll give Amateur Night 4 out of 5 stars.

Ti West makes weird, intense movies. They have a 1970s vibe. Raw. Cold. Unflinching. House of the Devil is a fantastic horror flick. The Innskeepers has its detractors, but I think it is worthy of your time. So I was excited that he had a segment in the anthology. His contribution to V/H/S feels more modern than his two US movies, but it exhibits the same detached, cold horror. Wes Craven mixed with Dario Argento. Unfortunately, it is about as shallow as much of Craven and Argento’s lesser works.

A young couple are traveling the American southwest. They’re bunking down for the night at a cheap hotel when a weird hitchhiker knocks on their door. There is a quick cut, and we’re shown the aftermath of this visit. The husband is visibly shaken. The wife less so.

The piece has a twist. It also has one scene of violence that is shocking, realistic, and hard to watch.

Tuesday the 17th directed by Glenn McQuaid
This one rips on slasher films. Four friends, two hot ladies, one jock, one dweeb (all four stereotypical on purpose, I’m sure) go to camp at a lake where a mass killing spree occurred the summer prior.

The acting is terrible (probably on purpose, but it does nothing to help the segment). A couple of the kills are funny. There are recreational drugs. And a lame twist.

You’re all going to fucking die up here.

The only thing interesting about the segment is its killer. You never “see” him. I mean, he is on screen, but obscured by tracking errors in the recording. Kind of cool effect.

You’ve probably seen the incredibly spooky ad for V/H/S where this segment’s pretty actress is given a good jump scare by a ghost slamming the door of her room. Yeah, that was pretty effective. And misleading.

The disappointment I felt upon the reveal of the true plot and the twist… it was upsetting, and not in a good way. Even if it did turn to science fiction at the end. 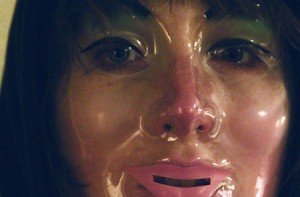 In a print anthology, you want to open strong and close strong. Perhaps not intentionally, the brains behind this film have arranged the best two segments to open and close. As Amateur Night is a monster story, this one is a ghost story. And a well-done one, at that.

Four guys hope to attend a Halloween party at a friend’s house. But the directions they’re given leads them to an oddly empty two story home. They go inside, find nobody, and instead of busting out of there at top speed, they elect to snoop around.

Upstairs, they hear some shenanigans in the attic. They venture further. And they find… a woman who appears to be the tied to the ceiling and about to become a sacrifice to a cult. Something ritualistic is going on.

The boys flee. But then they do something unusual… they decide they can’t leave the woman to die at the hands of the cult. So they go back to the attic. The unexpected chivalry is handled in a realistic, logical manner you seldom see in horror films.

Plot wise, that’s as much as I’ll divulge, because this segment has a fantastic conclusion, and a deliciously evil twist at the end. If you can ignore some cheesy special effects stolen right from a popular YouTube video, 10/31/98 makes suffering through the previous three stories almost worthwhile.

Then we’re taken back to the frame narrative. It provides no closure. Stuff happens. Why? Because. To compound the agony, the credits roll, not over new footage of one of the shorts, but of the same idiotic opening sequence we watched 90 minutes earlier. Did we really need to see the young woman sexually assaulted once again in the parking structure? No.

That aside, kudos to the filmmakers. Less misogyny would be nice. Better acting would be a plus. Cleaner plots please. But, all in all, this was an enjoyable horror flick that contains several real scares.

One thought on “Movie Review: V/H/S the horror movie anthology”

I was raised the son of an unemployed coal miner from the hills of southeastern Kentucky. After a childhood of rural adventure, adulthood has found me living in the verdant suburbs of Lexington, KY where I run and operate a speculative fiction press named Apex Publications.